The Nativity of the Blessed Virgin Mary

Nine months after the Immaculate Conception Holy Church celebrate Nativity of the Blessed Virgin Mary. From the 13th century on, the celebration assumed notable importance, becoming a Solemnity with a major Octave and preceded by a Vigil calling for a fast.

Nativity of the Blessed Virgin Mary

The birth of Mary begins the work of Redemption. In her crib, the mother of the Savior illuminates the desolate earth with the grace of her first smiles.

The birth of the Blessed Virgin was, then, one of the foremost events of history. Let us now examine how the birth was received and draw lessons from this meditation that will benefit our interior lives.

The holy Fathers of the Church express the impact of the birth of the Immaculate Virgin on the invisible world by describing the heavens overwhelmed with wondrous admiration. The angels were at a loss to find adequate praises for acclaiming the adorable Trinity for having created her who was the beloved Daughter of the Father, and who would become the Mother of the Word Incarnate and the Spouse of the Holy Ghost. Nor did they weary of admiring the beauties of their queen. The blessed spirits, who rejoice at the conversion of a single soul, rejoiced upon seeing the appearance of the sure Refuge of sinners. They knew that Mary would one day be the Gate of Heaven who would never refuse entry into the eternal kingdom to those who invoked her with confidence. The Fathers also note the immense sigh of relief of the just in limbo, those who had died since the beginnings of the world, as well as the furor of the demons in Hell, who saw the approaching end of their tyrannical reign.

The Immaculate Virgin was born amid universal indifference

How was the birth of Mary, which delighted heaven and terrified the fallen angels, received on earth? In fact, the Immaculate Virgin was born amid universal indifference. According to certain traditions, no one in the small town of Nazareth where Saints Joachim and Anne lived paid heed to the new arrival. Although the blood of David flowed in her veins, her family had fallen from its ancient splendor. Who noticed these impoverished people?

Anne and Joachim had been childless for many years, but the Lord had at last answered their prayers. They saw their daughter Mary as the measure of His celestial goodness to them. Little did they suspect, however, the veritable treasures the Most High had instilled in the soul of their child. They could not have imagined the wonder of her Immaculate Conception. They did not realize that the Mother of the Redeemer lay in their loving arms.

The Jews of the time were plunged in discouragement. The voice of the prophets had not been heard for years. Having lost their political freedom, they believed Providence had abandoned them. It was then that the hidden work of infinite Mercy began to be accomplished in their midst.

Nativity of the Blessed Virgin Mary

By sin mankind spurns our Sovereign Benefactor, and God withdraws from His creatures. Yet never entirely. And He will intervene at the very moment when we believe ourselves completely abandoned — if we have confidence.

These facts speak for themselves and teach us an obvious lesson. Would that the obscurity of Our Lady’s birth teaches us to make little of human greatness! Let us keep a Christian perspective of indifference toward the fleeting vanities that Christ Himself shunned in His Mother’s birth. Were these important, surely He would not have refused them to His mother.

This great mystery also teaches us never to lose heart. The Immaculate Mother came into the world at a time when the Jews had lost hope. Indeed, they thought all was lost. Let us reap the benefit of this lesson. We often become discouraged when, calling on heaven to assist us, our request is not immediately granted. Sometimes God waits until we are on the brink of the abyss before extending His hand of mercy. So, let us not become discouraged and cease praying! The Almighty will intervene at the very moment when we believe ourselves completely abandoned. If we have confidence — an unlimited supply of confidence — we will be greatly rewarded!

Saint Thomas of Villanova explained in a sermon that Mary is the heavenly dawn, not only for the world, but especially for each individual soul. He recalled the great truth taught by Catholic tradition that a soul imbued with devotion to the Blessed Virgin carries within it the sign of predestination. Do you firmly desire to be saved from final damnation? Then faithfully honor Mary. Do you wish to guarantee the salvation of those who are dear to you? Obtain from them the promise that they not fail to recite some prayer to Mary every day. Catholic Tradition states that a servant of Our Lady cannot perish: “Servus Mariae non peribit”. He will forever sing the mercy of Jesus and of His holy Mother.

Historical Details about the Feast

The origin of this Feast is sought in Palestine. It goes back to the consecration of a church in Jerusalem, which tradition identifies as that of the present basilica of St. Ann.

At Rome the Feast began to be kept toward the end of the 7th century, brought there by Eastern monks. Gradually and in varied ways it spread to the other parts of the West in the centuries that followed. From the 13th century on, the celebration assumed notable importance, becoming a Solemnity with a major Octave and preceded by a Vigil calling for a fast. The Octave was reduced to a simple one during the reform of St. Pius X and was abolished altogether under the reform of Pius XII in 1955.

The present Calendar characterizes the Birth of Mary as a "Feast," placing it on the same plane as the Visitation.

For some centuries now, the Birth has been assigned to September 8 both in the East and in the West, but in ancient times it was celebrated on different dates from place to place. However, when the Feast of the Immaculate Conception (which has a later origin than that of the Birth) was extended to the whole Church, the Birth little by little became assigned everywhere to September 8: nine months after the Solemnity of the Immaculate Conception.

Novena in Honor of the Nativity of the Blessed Virgin Mary 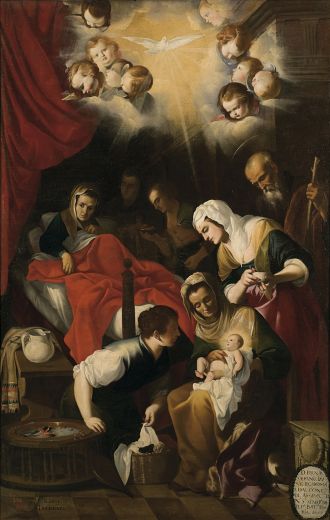