Feast of the Most Holy Name of Mary

The great victory, which John Sobieski, king of Poland, gained against the Turks under the walls of Vienna, caused the Pope Innocent XI, to make this Feast obligatory throughout the whole Western Church as a yearly act of thanksgiving for the deliverance of Christian Europe.

We celebrate the name of Our Most Holy Mother, Our Queen and Advocate, Mary. We call to Mary when we are in distress. It is her most Holy name we turn to for help in time of need. It is Mary who is always there ready to offer us her hand when we fall. “Following her, thou strayest not; invoking her, thou despairest not; thinking of her, thou wanderest not, upheld by her, thou fallest not; shielded by her, thou fearest not; guided by her, thou growest not weary; favored by her, thou reachest thy goal.” Mary is our guide, our key to holiness. It is through her we are able to reach Our Lord. Mary is always there for us and always will be, to protect us and guide us on our journey through this world, our journey to heaven.

The history of the feast

In 1513, a feast of "The Holy Name of Mary" was granted by Papal indult [Pope Julius II] to the diocese of Cuenta in Spain. It was assigned with proper Office on September 15, the octave day of Our Lady's Nativity. With the reform of the Breviary undertaken by Pope St. Pius V, the feast was abolished, only to be reinstituted by his successor, Pope Sixtus V, who changed the date to September 17. From there, the feast spread to the Archdiocese of Toledo [1622] and, eventually, to all of Spain and to the Kingdom of Naples [1671].

Throughout this time, permission to celebrate the feast was given to various religious orders in a prudent manner as has been the custom throughout Church history regarding feast-days, their dates, offices, liturgical expression, etc. However, this Feast of the Holy Name of Mary would one day be joyfully extended to the Universal Church, and this on account of rather dramatic circumstances involving one of Poland's great military heroes, John III Sobieski [1629-1696].

The year 1683, the Turkish hosts forced their way through Hungary to Vienna, and were besieging that city with an army of two hundred thousand men. When Pope Innocent XI heard of this terrible danger to all Christendom, he proclaimed a general jubilee, and granted a plenary indulgence to all who would come to the relief of Emperor Leopold I. by prayers, money, arms, or service. He entreated the faithful to do penance and reform, and exhorted them particularly to have recourse to the intercession of the Blessed Virgin, whose prayers are all-powerful with her Son. The siege lasted for sixty days, and it seemed impossible to hold the city any longer. But when the need is greatest, the help of God is nearest.

Fleeing from Austria, Emperor Leopold asked for king of Poland, John III Sobieski's assistance, a plea which was seconded by the Papal Nuncio. In July 1683, the Grand Vizier Kara Mustapha had reached Vienna and laid siege to the city, which was being defended by only 15,000 men. Sobieski set out for Vienna in August, his forces marching behind the banner of the Blessed Virgin. Passing by the Sanctuary of Mary in Czestochowa, they implored Our Lady's help and blessing. Writing centuries later to the bishops of Poland, Pope Pius XII recalled the supplications of Sobieski to Mary at the Sanctuary on Jasna Gora [i.e., "Bright Mount"], the site of the Shrine: "To the same Heavenly Queen, on Clear Mountain, the illustrious John Sobieski, whose eminent valor freed Christianity from the attacks of its old enemies, confided himself." [Letter, Cum iam lustri abeat, 1951]

On the eighth day of the September, the Feast of the Nativity of Mary, Sobieski prepared himself for the ensuing conflict by the reception of Holy Communion.

Battle was engaged before the walls of Vienna on September 12, 1683, with Sobieski seemingly put to flight by "the fierce Turkish forces. However, this retreat was a minor setback only. The Hussars renewed their assault and charged the Turks, this time sending the enemy into a retreat. The combat raged on, until Sobieski finally stormed the enemy camp. The Turkish forces were routed, Vienna was saved, and Sobieski sent the "Standard of the Prophet" to Pope Innocent XI along with the good news. In a letter to the Pontiff, Sobieski summed up his victory in these words: Veni, vidi, Deus vicit — "I came, I saw, God conquered!" To commemorate this glorious victory, and render thanksgiving to God and honor to Our Lady for their solicitude in the struggle, Pope Innocent XI extended "The Feast of the Holy Name of Mary" to the Universal Church. Although the feast was originally celebrated on the Sunday after the Nativity of Mary, Pope St. Pius X [+1914] decreed that it be celebrated on September 12, in honor of the victory of the Catholic forces under John Sobieski. The history of this feast reminds us in some ways of that of "Our Lady of the Rosary," which was instituted to celebrate and commemorate the victory of the Catholic forces over the Turkish navy at the Battle of Lepanto in 1571: "And thus Christ's faithful warriors, prepared to sacrifice their life and blood for the welfare of their Faith and their country, proceeded undauntedly to meet their foe near the Gulf of Corinth; while those who were unable to join them formed a band of pious supplicants, who called on Mary and, as one, saluted Her again and again in the words of the Rosary, imploring Her to grant victory to their companions engaged in battle. Our sovereign Lady did grant Her aid." [Pope Leo XIII, Supremi Apostolatus, 1883]

The Most Holy Name of Mary

"And the Virgin's name was Mary." (St. Luke, 1.27) St. Peter Chrysologus said: "Mary in Hebrew signifies Lady or Sovereign; and truly the authority of her Son, who is the Lord of the world, constituted her Queen, both in fact and in name from her very birth (Petr. Chrys. Sermo cxlii, de Annuntiat. Homily of the 3rd Nocturn)."

The Name of Mary, which is the joy of Angels and the terror of demons, protects man against countless evils, and supports him on his way to heaven. All the delight of heaven, all the hopes of earth, are centered on the cradle where Mary sleeps, while her heart is watching before God. Wisdom praises her own self: by the blessed daughter of Anne and Joachim, the loving preference shown by that Divine Wisdom from the beginning of the world, is already justified; for ever more it will be her delight to be with the children of men. The chosen vine, the vine of the Peaceful One is before us, announcing, by its fragrant blossom, the divine grape, whose juice, pressed out in the wine-press of the cross, will give fruitfulness to every soul, and will inebriate earth and heaven.

Annunciation — this is the most solemn embassy ever recorded in the history of Angels or of men; it shows us how Mary is what her name signifies, Mistress of the world. The highest interests of the human race, past, present, and to come, of the heavenly hierarchy, and of God Himself, are here at stake; and the transaction is carried on between the Most High and the Virgin of Nazareth alone, as having exclusive right, the One to propose, the other to accept, both to conclude. The Angel is but a messenger; man, too, stands in waiting; Mary enters into a contract with the Creator, in the name of Angels and of men, as in her own name; in the name of the entire world, which she represents, and over which she reigns supreme. 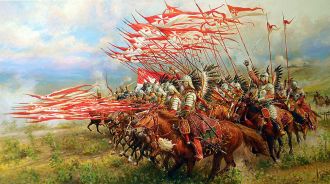 The battle of Vienna 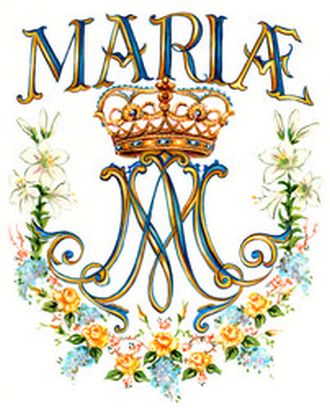