Our Lady of Ransom or of Mercy

The story of Our Lady of Ransom is, at its outset, that of Saint Peter Nolasco, born in Languedoc about 1189. At the age of twenty-five he took a vow of chastity and made over his vast estates to the Church. After making a pilgrimage to Our Lady of Montserrat, he went to Barcelona where he began to practice various works of charity. He conceived the idea of establishing an Order for the redemption of captives seized by the Moors on the seas and in Spain itself; they were being cruelly tormented in their African prisons to make them deny their faith. He spoke of it to the king of Aragon, James I, who knew him well and already respected him as a Saint; for the king had already asked for his prayers when he sent out his armies to combat the Moors, and he attributed his victories to those prayers.

In effect all the Christians of Europe, and above all of Spain, were praying a great deal to obtain from God the remedy for the great evil that had befallen them. The divine Will was soon manifested. On the same night, August 1, 1218, the Blessed Virgin appeared to Saint Peter, to his confessor, Raymund of Pennafort, and to the king, and through these three servants of God established a work of the most perfect charity, the redemption of captives.

On that night, while the Church was celebrating the feast of Saint Peter in Chains, the Virgin Mary came from heaven and appeared first to Saint Peter, saying that She indeed desired the establishment of a religious Order bearing the name of Her mercy. Its members would undertake to deliver Christian captives and offer themselves, if necessary, as a gage. Word of the miracle soon spread over the entire kingdom; and on August 10th the king went to the cathedral for a Mass celebrated by the bishop of Barcelona. Saint Raymund went up into the pulpit and narrated his vision, with admirable eloquence and fervor. The king besought the blessing of the bishop for the heaven-sent plan, and the bishop bestowed the habit on Saint Peter, who emitted the solemn vow to give himself as a hostage if necessary. The members of the Order bound themselves by a fourth vow to remain, when necessary, as securities in the power of the pagans, in order to deliver Christians.

The Order, thus solemnly established in Spain, was approved by Gregory IX under the name of Our Lady of Mercy. By the grace of God and under the protection of His Virgin Mother, the Order spread rapidly. Its growth was increased as the charity and piety of its members was observed; they very often followed Her directive to give themselves up to voluntary slavery when necessary, to aid the good work. It was to return thanks to God and the Blessed Virgin that a feast day was instituted and observed on September 24th, first in this Order of Our Lady, then everywhere in Spain and France. It was finally extended to the entire Church by Innocent XII.

Blessed be Thou, O Mary, the honor and the joy of Thy people! On the day of Thy glorious Assumption, Thou didst take possession of Thy queenly dignity for our sake; and the annals of the human race are a record of Thy merciful interventions. The captives whose chains Thou hast broken, and whom Thou hast set free from the degrading yoke of the Saracens, may be reckoned in the millions. We are still rejoicing in the recollection of Thy dear Birthday; and Thy smile is sufficient to dry our tears and chase away the clouds of grief. And yet, what sorrows there are still upon the earth, where Thou Thyself didst drink such long draughts from the cup of suffering! Thou alone, O Mary, canst break the inextricable chains, in which the cunning prince of darkness entangles the dupes he has deceived by the high-sounding names of equality and liberty. Show thyself a Queen, by coming to the rescue. The whole earth, the entire human race, cries out to Thee, in the words of Mordochai: "Speak to the King for us, and deliver us from death!" (Esther 15: 3) 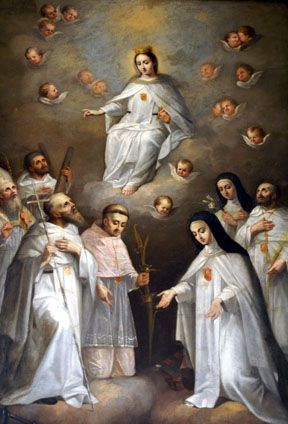