The Seven Holy Founders of the Servite order

The Blessed Virgin Mary appeared to seven men. In Her hands She held a black habit. Multitudes of angels surrounded Her. Some bore the different instruments of Christ’s Passion. One held the Rule of St. Augustine. Another held in one hand a scroll, on which appeared the title "SERVANTS OF MARY" surrounded by golden rays, and in his other hand he held a palm branch. The Queen of Heaven and Earth addressed the men: "I come, Servants well beloved and elect, I come to accomplish your desires and grant your prayers; here are the habits in which I wish you should in future be clothed; their black hue should always bring to mind the cruel Dolours which I felt by reason of the Crucifixion and Death of my only Son; the Rule of St. Augustine, which I give you as the form of your Religious Life, will gain for you the palm prepared in heaven, if you serve me faithfully on earth." The vision vanished, and the foundation of the Servite Order was definitely accomplished.

The Servants of Mary were largely responsible for feast days in the Church dedicated especially to the Sorrows of Our Lady. The particular object of the order is to sanctify first its own members, and then all men through devotion to the Mother of God, especially in her desolation during the Passion of her Divine Son. The Rosary of the Seven Dolours is one of their devotions, as is also the Via Matris. 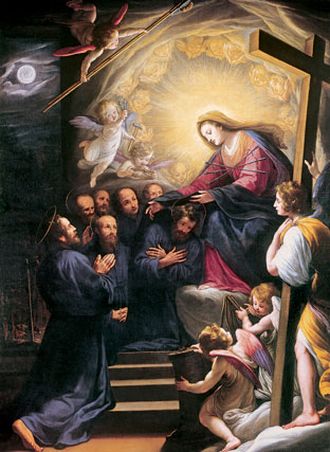