Today is the Feast Day of St. Joseph, the Spouse of Mary, the Foster-Father of the Son of God, that comes to cheer us by his dear presence.

Heaven designated him as being the only one worthy of such a treasure: the rod he held in his hand, in the Temple, suddenly produced a flower, as though it were a literal fulfilment of the prophecy of Isaias: There shall come forth a rod from the root of Jesse, and a flower shall rise up out of his root (Is. 11.1). The rich pretenders to an alliance with Mary were set aside; and Joseph was espoused to the Virgin of the House of David, by a union which surpassed in love and purity everything the Angels themselves had ever witnessed.

But he was not only chosen to the glory of having to protect the Mother of the Incarnate Word; he was also called to exercise an adopted paternity over the very Son of God. So long as the mysterious cloud was over the Saint of Saints, men called Jesus the Son of Joseph, and the Carpenter's Son. When our Blessed Lady found the Child Jesus in the Temple, in the midst of the Doctors, she thus addressed him: Thy father and I, sorrowing, have sought thee (Luke, 2.48); and the holy Evangelist adds, that Jesus was subject to them, that is, that He was subject to Joseph as He was to Mary.

Who can imagine or worthily describe the sentiments which filled the heart of this man, whom the Gospel describes to us in one word, when it calls him the just man (Matt. 1.19)? Let us try to picture him to ourselves amidst the principal events of his life: his being chosen as the Spouse of Mary, the most holy and perfect of God's creatures; the Angel's appearing to him, and making him the one single human confidant of the mystery of the Incarnation, by telling him that his Virgin Spouse bore within her the fruit of the world's salvation; the joys of Bethlehem, when he assisted at the Birth of the Divine Babe, honoured the Virgin Mother, and heard the Angels singing; his seeing, first the humble and simple Shepherds, and then the rich Eastern Magi, coming to the stable to adore the new-born Child; the sudden fears which came on him, when he was told to arise, and, midnight as it was, to flee into Egypt with the Child and the Mother; the hardships of that exile, the poverty and the privations which were endured by the hidden God, Whose foster-father he was, and by the Virgin Spouse, whose sublime dignity was now so evident to him; the return to Nazareth, and the humble and laborious life led in that village, where he so often witnessed the world's Creator sharing in the work of a Carpenter; the happiness of such a life, in that cottage where his companions were the Queen of the Angels and the Eternal Son of God, both of whom honoured, and tenderly loved him as the head of the family: yes, Joseph was beloved and honoured by the uncreated Word, the Wisdom of the Father, and by the Virgin, the master-piece of God's power and holiness.

We ask, what mortal can justly appreciate the glories of St. Joseph? To do so, he would have to understand the whole of that Mystery, of which God made him the necessary instrument. What wonder, then, if this Foster-Father of the Son of God was prefigured in the Old Testament, and that by one of the most glorious of the Patriarchs? Let us listen to St. Bernard, who thus compares the two Josephs: "The first was sold by his brethren, out of envy, and was led into Egypt, thus prefiguring our Saviour's being sold; the second Joseph, that he might avoid Herod's envy, led Jesus into Egypt. The first was faithful to his master, and treated his wife with honour; the second, too, was the most chaste guardian of his Spouse, the Virgin Mother of his Lord. To the first was given the understanding and interpretation of dreams; to the second, the knowledge of, and participation in, the heavenly Mysteries. The first laid up stores of corn, not for himself, but for all the people; the second received the Living Bread that came down from heaven, and kept it both for himself and for the whole world. (Homily 2nd. On the Missus est.)"

Such a life could not close save by a death that was worthy of so great a Saint. The time came for Jesus to quit the obscurity of Nazareth, and show himself to the world. His own works were henceforth to bear testimony to his divine origin; the ministry of Joseph, therefore, was no longer needed. It was time for him to leave this world, and wait, in Abraham's bosom, the arrival of that day, when heaven's gates were to be opened to the just. As Joseph lay on his bed of death, there was watching by his side He that is the master of life, and that had often called this his humble creature, Father. His last breath was received by the glorious Virgin Mother, whom he had, by a just right, called his Spouse. It was thus, with Jesus and Mary by his side, caring and caressing him, that Joseph sweetly slept in peace. The Spouse of Mary, the Foster-Father of Jesus, now reigns in heaven with a glory which, though inferior to that of Mary, is marked with certain prerogatives which no other inhabitant of heaven can have.

From heaven, he exercises a powerful protection over those that invoke him. In a few weeks from this time, the Church will show us the whole magnificence of this protection; we shall be having a special Feast in honour of the Patronage of St. Joseph. What the Liturgy proposes to us today, are his glories and privileges. Let us unite with the Faithful throughout the world, and offer the Spouse of Mary the Hymns, which are this day sung in his praise. 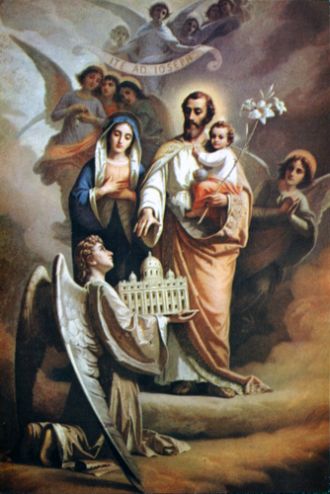